The very name Mesopotamia speaks of the geographical location it is located in. It is actually a Greek word which can be broken into ‘mesos’ which means middle and ‘potamos’ which stands for land between rivers. The two rivers in question here are the Tigris and Euphrates.

This region is the modern day Iraq and a small part of Syria. These lands were called the Sumer of Akkad and Babylonia in the third and second millennium respectively. The soil of this region was so fertile that it was just apt for a settlement.

The rich silt deposit brought up by the two rivers over many years actually made the land so fertile that surplus food was a guarantee on its farms. It had its other side too however as the region was quite prone to flooding. 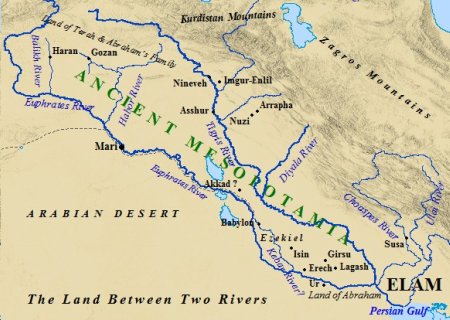 However the Mesopotamians devised methods to tackle situations. A good network of irrigation canals were designed to help in flood conditions and also utilize the same water for farming.
The neighbouring areas of Mesopotamia were however not as productive as it was.

Modern day countries of Turkey, Israel, Jordan, Lebanon and Syria used to border one side of Mesopotamia while on the other side lay the great Sahara Desert. Modern day Iraq can be roughly used to mark the geographic boundaries of Ancient Mesopotamia.

The rivers Tigris and Euphrates had different characteristics in this region. Tigris was a rather rough and fast flowing river in fact the Greek meaning of Tigris is actually ‘fast as an arrow’. So fast is the flow that the water cuts deep in the neighbouring areas and thus it is almost impossible to use its water for irrigation.

The Euphrates on the other hand can be rightfully called the lifeline of the city. It is much more stable and the banks are lower and if it would flood it would be a much gentler one as compared to the Tigris. This river was also used for navigation purposes by ships.

Thus we find that the Mesopotamian geography was rich in all aspects for the mushrooming of a proper civilization. It was actually the key factor behind the development of so many civilizations in this region.