The Mesopotamian civilization flourished in a region of richness. Where two most significant rivers meet, the Tigris and the Euphrates, like every other civilization a significant part of their culture, art and designing reflected in their attires especially their jewellery.

About 4000 years ago, this art was getting beautifully harnessed at the cities of Sumer and Akkad. While unearthing archaeological areas of the time period which dates back to 2900-2300 BC, tomb of Puabi contains beautiful artefacts of gold, silver and other many such similar precious stones.

Beautiful gold figurines, amazing looking ornate crowns, collar neckpieces, various designs and size of necklaces and pins headed by jewels! The men and women of this civilization were clearly were fond of wearing jewellery and wore it in excessive amounts. 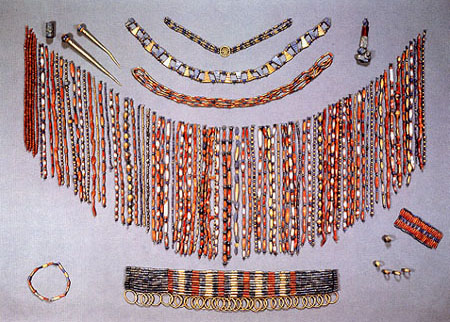 Men mostly stuck to amulets, ankle bracelets and other different neckpieces and mostly seals which were usually cylindrical.

The jewellery was created from thin metal leaf and then many precious and semiprecious stones were cast in them. The stones were expensive, looked grand and were brightly coloured ones. The shapes and sizes of jewellery usually were thematically based on Mother Nature.

Leaves, spines and cones were the most common shape of the jewellery being created. It was created for both human use and also for the statues which were in the same way manufactured in large numbers.

The stones used agate, lapis, carnelian, and jasper. Techniques like granulation of a very fine variety and engraving were both done extensively on the jewellery.

Records from the archaeological survey maintain that jewellery was not only manufactured for personal consumption but also for the purpose of trade and commerce.

Many royal archives show jewellery of the highest degree and quality. Chalcedony bead work was very popular work used in jewellery in those days. Other forms of bead work were fluted bead work and lapis lazuli bead work.