Ancient Mesopotamia is a crossroads where many ethnic groups have mingled each bringing as so many accretions, its own traditions while unconsciously letting itself be shaped in a common mold. Ancient Mesopotamia begins in the 6th millennium BC and ends with the rise of Achaemenid Persians. 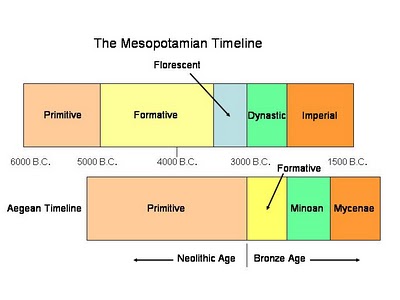 With the passage of time sometime around 3900 BC came the Ubaid period which was well known for the provenance of temple and other type of sophisticated architecture. Ubaid period was the first long-familiar culture from southern Mesopotamia.

The Mesopotamian timelines continues with the emergence of Warka period. It was the first civilization after the Ubaid period in southern Mesopotamia, the Warka period marks the beginning of the Protoliterate period which existed during 3600 BC.Then around 3400 BC came the Gawra and Ninevite period.

With the passage of time in 1800 BC the old Babylonian period began which lasted till 1170 BC. Then the next milestone in the timeline of Mesopotamia was Hammurabi who was the sixth king of Babylon. Hammurabi is known for the set of laws called Hammurabi’s Code, one of the first written codes of law in the recorded history (1728 BC to 1685 BC.)

1600-1100 BC staggered periods of Hittite hegemony over Mesopotamia. The Hittites were Bronze Age people of Anatolia. Moving on to 1520-1170 BC, this was the period of kassite dominance followed by the Assyrian period which was from 1200-612 BC.

The timeline between 714-612 BC accompanied the reign of Sennacherib, (the son of Sargon II, whom he succeeded on the throne of Assyria). Then came the reign of Ashurbanipal, the most energetic of the Assyrian conquerors and in 612 BC the fall of Nineveh was witnessed which was followed up by the Neo-Babylonian period (612-539 BC).

In 539 BC when Babylon was conquered by the Achaemenid Empire. It fell to Alexander the Great in 332 BC and after his death it became part of the Greek Seleucid Empire. This period marked the fall of Babylon and the beginning of Persian dominance in Mesopotamia. Around 150 BC, Mesopotamian timeline was under the control of the Parthian.

Mesopotamia became a battlefield for the Romans and Parthian, with parts of Mesopotamia coming under periodic Roman control. In 226 AD, it fell to the Sassanid Persians, and remained under Persian rule until the 7th century Arab Islamic conquest of the Sassanid Empire. These are the major milestones in the timeline of Mesopotamia.