Writing wasn’t discovered in the form we use it in, today but has evolved through centuries in time under the influence of numerous civilisations. The invention of writing is widely regarded as the beginning of the Information Revolution and although it wasn’t the creation of any single culture, the Sumerians of Mesopotamia are credited with the invention of writing, its earliest forms dating back to as far as 3500B.C. 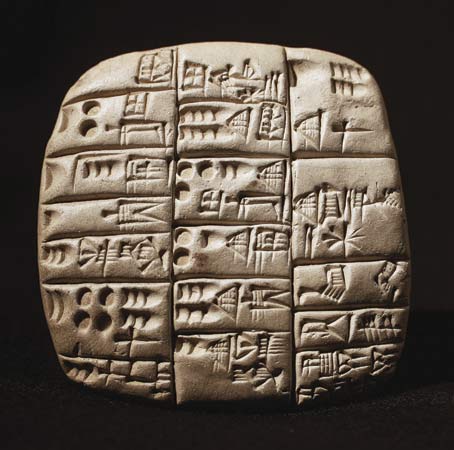 The earliest record of written work-clay tablets- which date back to around 3200B.C. were discovered by archaeologists form the Oriental Institute at Tell Asmara in modern day Iraq.
With clay being a difficult material to draw lines and curves on, the writing on these early tablets consist of mainly simple drawings, pictures or pictograms which usually symbolise an object or idea.

These depictions were later on reduced from pictograms to a series of signs (wedge like in shape) that were pressed into clay using a reed stylus. Eventually this form of writing came to be known as CUNEIFORM.

As mentioned above, the invention and development of writing and writing tools was the dawn of Information Revolution. Such advancement completely changed the demographics in various spheres of life such as communication, commercial, administrative and storage.

As always, the invention of writing came about as there was a need for it. With its being, news, ideas and messages could be sent to various places without having to rely on a messenger’s memory, it was used for keeping records of not only commercial transactions but also for administrative procedures and as copy books for next generation of scribes.

Also, later on, this writing evolved from tiny pictures giving insights into the lives of the people to a more abstract symbolic language representing syllables, words, concepts or ideas.

This language using pictures, was found to be similar to yet more abstract than the Egyptian hieroglyphics, which were eventually developed into a syllabic alphabet under the Semites (Assyrians and Babylonians) who later on went on to dominate the area.

As this invention, developed, with technological advancement and greater understanding, the cuneiform script was eventually used to immortalise some of the greatest works in literature in history, to be discovered, observed and appreciated for centuries to come.