Agriculture in Mesopotamia could develop largely due to the improved irrigation system and drainage systems. Agriculture helped not only to develop the ancient Mesopotamian economy, but it also aided to a large extent in the building of cities by the Sumerians and the Akkadians. 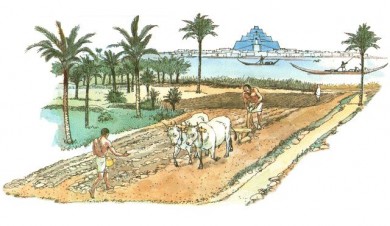 The region rested between the two famous rivers, the Tigris and the Euphrates and was known as the Fertile Crescent, much of which is now part of modern day Iraq.

Major cities like Ur, Lagash and Uruk came up on the Euphrates tributaries and the branches of the Tigris. Rivers provided the necessary resources for food like fish which was abundantly available as well as reeds and clay which was used for building materials. Even though the land closer to the rivers was fertile, the hinterland was largely barren. 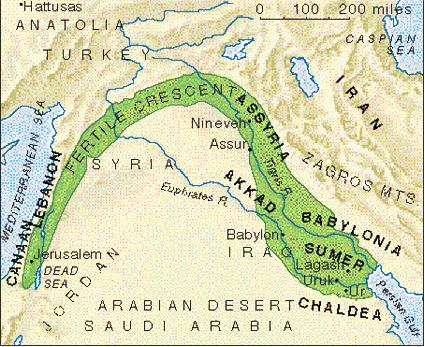 But that did not stop the ancient Mesopotamians from being self sufficient in agricultural produce and they developed the art of cultivating good crops. The fertility also triggered development of water control with dams and the people quickly learnt the benefit of aqueducts. Early Mesopotamians took the help of wooden plows for softening the soil before cultivating vital crops like apple, onions, grapes, turnip and barley.

People learnt to fight against the vagaries of nature:

They were among the first civilizations in the world to make wine and beer. Like Egypt, agriculture Mesopotamia developed largely due to the annual flooding of the Euphrates and the Tigris rivers.

But the timing of the floods was a problem with the people of Mesopotamia. The reason why Mesopotamians had to think hard for fine tuning the agricultural procedures was that the soil contained huge salt deposits just below the surface.

Constant warfare, unlike Egypt, forced Mesopotamians to face food shortage due to the inability of maintaining irrigation ditches. Nomadic lifestyles characterized by tent dwellings and use of sheep, goat and camels made seasonal grazing possible.

The people had to source timber, precious metals and building stone, which was scarce, by trading in the produce developed from agriculture in Mesopotamia. Diverse activities like water borne fishing culture existed in prehistoric Mesopotamia as well.