Shelter constitutes a significant basic need of human being. Homes were regarded as the basic units where families could originate. It is indeed interesting to discuss the housing systems of the people of Mesopotamia. Be the family rich or poor, all of them had houses to live in Mesopotamia.

We know that absolute equality did not prevail in the Mesopotamian society. There were palaces, Double storied and single storied houses. The wealthy class lived in large houses with many number of rooms, sometimes with gardens. 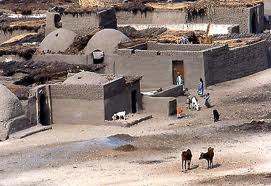 Initially, the building materials comprised of reeds which were perishable. But subsequently, viable materials began to be used which resemble modern materials. Mud bricks, Mud plaster and wood were common which varied in shapes and sizes.

The Mesopotamian palaces deserve mention. They were highly decorated buildings which initially functioned as socio economic institutions and later served as storehouses, workshops and shrines.

Assyrian palaces have on their walls pictorial and textual narrations. Gates and passageways had stone sculptures of mythological figures. Palaces were also centres of abundant ivory furniture pieces.

Houses existed very close together and poorly ventilated. It is said that houses were even white-washed. 10 feet by twelve feet was the average room size of most houses.