Mesopotamian religious practices varied through time and distance, it was basically characterised by polytheism. Mesopotamian mythology suggests a number of gods and goddesses. Gods represented places and powers in ancient Mesopotamia. Priests were an important part of the Mesopotamian social structure. Temples could be found anywhere in the city.

There were hundreds of thousands of deities. Each god had priests, temples and followers. An was the primary god of Mesopotamians who was the god of heavens. He was also the over arching bowl of heaven.

Enlil was the god of the air and the storms. Enlil produced storms or stopped them in order to help men. Enki was the god of water and the earth. Enki was also the patron of wisdom. The goddess of love and war was Inanna.

Sometimes, gods represented certain places. Ashur was the patron god of Assyria and Marduk of Babylon. Enki was associated with the city of Eridu. Dingir was the Sumerian name for the gods and they were called as ilu in Akkadian language. 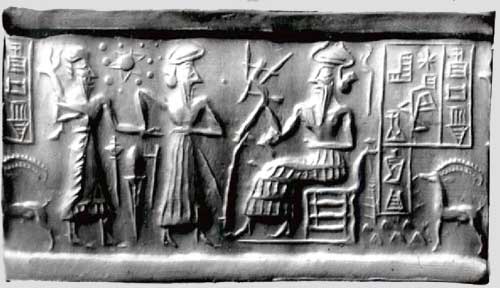 Mesopotamian religion was not only polytheistic, but also henotheistic, where certain gods are viewed superior to others. It was in the later period that the Mesopotamians began ranking the deities in order of importance.

Some gods had human form requiring food and drink. According to J Bottero, gods were not viewed mystically. They were rather seen as high masters who were to be obeyed and feared.