The two most significant civilizations of the world developed in the same region of Middle East and North Africa, closely interlinked and influenced by each other. In more ways than one these civilizations grew up in contrast of each other.

The way of Government which in case of Egypt was central and authoritative in the case of Mesopotamian stresses mostly on city-state equation. The difference in architecture was drastic. Whereas the Egyptians liked majestic structures, the Mesopotamian art was simple and had a strong literary element which the other lacked. 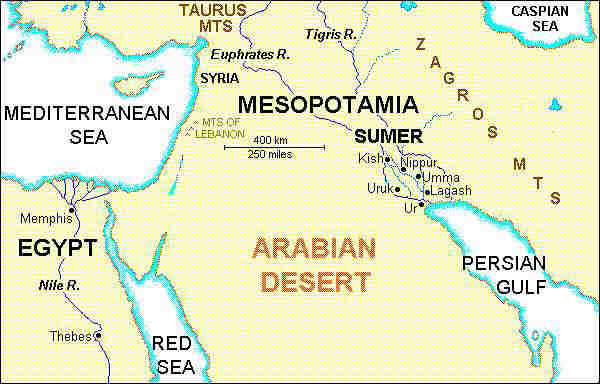 The Mesopotamians did not have access to boulders and huge stones or to the labourers which the Egyptians managed easily for their monument construction.

The bureaucracy was indefinitely affected by the structures. And Mesopotamian more pragmatic in their thinking did not believe in the Egyptian preparation for afterlife.So here we are to compare and contrast Egypt and Mesopotamia.

Both these civilizations carried out extensive trading but the economic overtone varied in most cases. Mesopotamia was more technological in its approach and the environment was very difficult to manage than the Nile valley. The contacts of trade were a lot vaster and far flung. And special importance was given to the merchant class and commercial law.

The social differences were vast. Like the difference in social status of women in the two contrary civilizations. It is concluded that in Egyptian society women were given more importance to. To stabilize the Egyptian monarchy women of the upper class were important and were treated with much care and respect which wasn’t the case in Mesopotamian.

Since these civilizations grew up in similar environments they had a symbiotic relationship. Though there are doubts but Egyptian is certainly older to Mesopotamian. Their origins are largely different so is their way of working.

Egypt was a more stable civilization compared to Mesopotamia and also more full of life and mirth.
Economically perhaps Mesopotamia flourished more than Egypt and in art and culture Egypt edged over Mesopotamia.

Though a real comparison would involve a more vast study of the various aspects of society, Mesopotamia had a very violent internal history. Historians often points out that inter war within the civilization led to its downfall.