As warfare was rampant in ancient Mesopotamia, the soldiers used a wide array of weapons that were popular during the time. They used daggers, shields, spears, maces, bows and arrows to fight off invading armies and for waging war against city states. 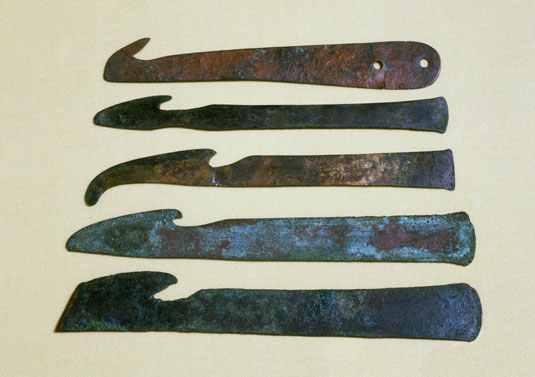 There is a large list of weapons compiled by archaeologists and historians who have excavated several sites and stumbled upon clay tablets with pictorial inscriptions on them.

Knowledge about the weapons used in warfare came from the structures and the plagues which provide a rich source of information have never ceased to fascinate historians down the ages. There is evidence that soldiers in ancient Mesopotamia formed squares, shield walls and phalanxes in battle fields. There were various types of swords, bows and arrows as well.

The two handed sword, the club, javelin, lance, pole arm, which was a specific pike, the sling, staff and dagger were commonly used in warfare. But there is no evidence of the cross bow, the war hammer or the long bow being used anywhere despite a series of excavations down the centuries. The spear breaker and the Egyptian bladed mace were also commonly used and they sported some unique designs as well.

Compared to a normal mace, the Egyptian bladed mace is large and stuck on the back. The soldiers relied on heavy metal, leather and shields as a protective measure in battlefields. The leather was usually studded with copper and breast plates were either made of iron or bronze.

Use of leather armor was quite common and the plaques and structures unearthed show heavy armor on Mesopotamian soldiers. Soldiers also sported heavy cloaks to prevent attacks from the copper socket axe.

The stele fragments show spear bearers and soldiers wearing helmets for the first time. Later day civilizations copied the warfare and weapon uses of ancient Mesopotamian soldiers. The helmets were made of copper, and for comfort; they had an inner lining of leather as well.

Many helmets were excavated at Ur in the Royal Tombs. The helmets used by Mesopotamians were a bulwark against the mace, used as a weapon by invading armies.