Much has been said and written about the Mesopotamian era. The era was indeed a golden one and one that saw marked progress in the fields of art, architecture, agriculture, culture, mathematics, literature, etc.

The rich and developing civilization must have indeed been bliss to the surrounding region. Another aspect in which the Mesopotamian’s excelled was their music. It might surprise you that the music in those days was quite developed and popular amongst the masses.

The music of Mesopotamia was definitely of primitive form but in no way less pleasant than the most modern of music. One thing is quite common about the primitive forms of music all across the world. Almost all of them are dedicated to gods and goddesses.

Mesopotamia doesn’t show any difference. However the music in Mesopotamia was also found to be hugely dedicated to the description of important events. Songs and music were usually for entertaining the rulers and elite of society in the olden days but in Mesopotamia even ordinary people seemed to derive equal pleasure from it. 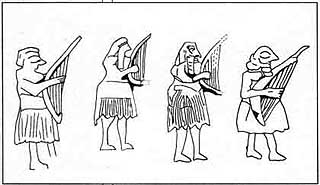 Lyrics and music was passed on through generations simply by word of mouth. However, after the evolution of writing recording songs became much easier and free from errors. The music of Mesopotamia played a very important role in recording historical events.

This instrument is generally regarded as the primitive form of the European Lute. The name is said to have been derived from the Arabic word al-ud which means the wood. This is perhaps the name of the tree the wood from which is used to make this musical instrument.

There are no remarkable representations of the existence of any other musical instrument of this age. However it is evident that music and dance both where quite popular modes of entertainment in the Mesopotamian era. Be it the common masses or the elite class everyone had equal attachment to music.