Temples in Mesopotamia were popularly known as ziggurat which was built on a raised area and the structures were also predominant in Iran as well. The structure was like a raised pyramid with several receding stories. The temples were built during the time of the Sumerians, Babylonians and the Assyrians in ancient Mesopotamia. Some of the earliest structures were constructed as early as 3 BC.

The receding tiers rested on a triangular, square or oval platform with the top resembling a pyramid. Mud bricks baked in the sun were used for the construction and the exterior was usually glazed with different colors which were in tuned to astrological importance. Tiers ranged from two to seven and a temple or a shrine was created at the crest. Ramps were used for access to the temples in Mesopotamia.

The ziggurats were regarded as the house of gods and only priests were permitted entry for their safekeeping. They took upon themselves the task of looking after the gods who were known to look after the people.

Naturally, the priests wielded a lot of power in ancient Mesopotamia and they were extremely powerful members of society. Priests held sway and were at par as well as higher in class to the merchant and wealthy classes. 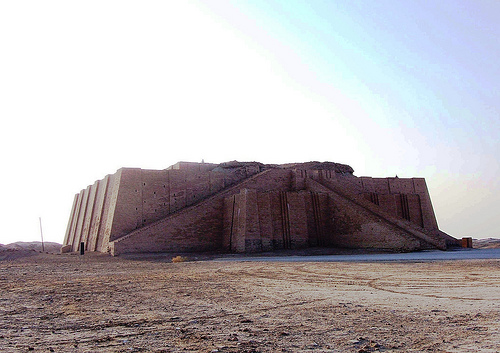 One could also climb from the base to the top with the help of spiral stairs as well. According to available records, there were nearly 32 ziggurats in and around the region which were regarded as the temples of Mesopotamia. Out of them, only 4 are in present day Iran, while the rest are in Iraq. Among the best preserved temple is the one in the western part of Iran and the most recent discovery took place at Sialk in central Iran.

The structure at Iran survived the long war the country fought with Iraq in the 1980’s when many notable architectural sites were damaged. The complexes of the gods in Uruk dating back to 4 BC and excavated sites at in Syria and Turkey tell us something about the condition of the period as well as the temples in Mesopotamia.