Writing emerged in many different cultures and in numerous locations throughout the ancient world. Between 8000 and 3200 B.C the Mesopotamians who are credited to invent the writing system used clay “tokens” to count their goods. However, the rise of the state in about 3200 B.C increased the complexity of the information they wished to store, and so clay tablets were used to record script composed of the symbols on the tokens.

From 3100 B.C, the state required each person to record their name along with details of their goods. As writing personal names logographically was very difficult, a system of phonetic writing was developed which gradually evolved into Cuneiform.

In its first stages, cuneiform writing was based on pictographs, but for practical reasons, a system based on straight lines came to prevail. As the pictographs transited to symbols made from straight lines, they lost their original resemblance to the objects they represented. 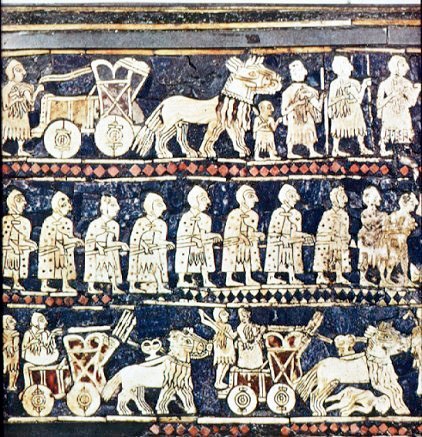 Numbers were represented by repeated strokes or circles. In order to write in cuneiform, a stylus was used to make tapered impressions in clay.
At first every character represented one word, but many words lacked their own symbols. For these, symbols of related objects were used. Initially, cuneiform was written from top to bottom.

Then during the 3rd millennium, this changed into writing from left to right. The signs also took on new form, being turned on their sides. Cuneiform signs were first written and read in columns. Later, they were written and read in rows. This meant that the signs are now rotated by 90 degrees.

Cuneiform writing developed into a mixture between logograms and syllables. Logograms allowed that one sign could be read as more than one sound, and, therefore, having more than one meaning. There were 600 signs in the fully developed cuneiform system.

Half were logograms/syllables, and the other half only logograms. Only in its latest stages, with Ugarit and Old Persian, did cuneiform signs become alphabetic signs. In Old Persian there were 36 characters, including a word-divider.

Cuneiform writing originated in southern Mesopotamia, and was created in the Sumerian culture, in order to write in the Sumerian language. Later it was used for Akkadian, Babylonian and Assyrian. Cuneiform developed into the dominant writing style of the Middle East, and even spread to Egypt, where hieroglyphic writing was normally preferred.

The invention of writing was the dawn of the information revolution. This great technological advance allowed news and ideas to be carried to distant places without having to rely on a messenger’s memory. Like all inventions, writing emerged because there was a need for it.

In Mesopotamia, it was developed as a record-keeping vehicle for commercial transactions or administrative procedures. There are also texts that served as “copy books” for the education of future scribes. Eventually, cuneiform script was used to produce some of the greatest literary works in recorded history.